Bad Credit Cost Me a JOB in Indianapolis 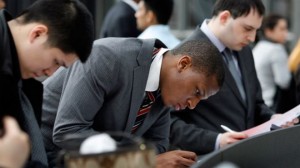 Credit cards. Mortgages. Car loans. These are the types of things that typically come to mind when thinking about your credit. But a bad credit history can do more than ruin your chances of getting a loan or landing a great interest rate — it can cost you a job.

A former banker says, he couldn’t find a job for more than a year thanks to his credit report, which took a hit after he made four late mortgage payments and went through a short sale on his Indiana home at the peak of the financial crisis.

His credit was the last thing on his mind when he decided to move to Indianapolis, Indiana last year. With 14 years of banking experience under his belt and great recommendations from previous employers, he was confident he would have no problem getting a new job.

But it turned out he was much less desirable than he thought. After running credit checks on him, more than a dozen employers told him he was too much of a credit risk.

“He now feels like a criminal [but] He doesn’t have a criminal history … [his mortgage trouble] never affected his ability to carry out his job or make decisions. He never thought of abusing his position in any way,” he stated. “As a banker, I firmly believe that credit checks should be for applying for credit only.”

It’s not just those in the financial industry who are being denied jobs due to credit checks.

An estimated one in four unemployed Americans have been required to go through a credit check when applying for a job, and one in 10 have been denied jobs due to negative information in their credit reports, according to a recent survey by liberal think-tank Demos. And the true number of people who have been denied jobs because of this screening process is likely a lot higher, since many employers likely don’t admit to doing this, Demos found.

Federal regulations require employers to receive permission from job candidates before running credit checks and to disclose that a negative credit report factored into any decision to deny an applicant. But these rules are difficult to enforce, since employers can always cite other reasons for declining a job applicant.

A 39-year-old Marketer from Indianapolis, IN., was laid off from her marketing job at a health care company in 2008 right before the company folded. She was suddenly unable to make payments on her phone or student loans and defaulted on a short-term loan.

She blames the resulting black marks on her credit report for her inability to land another job in the health care field over the past five years. While she hasn’t received notices from employers saying she was denied the job because of her credit, she has connected the dots — typically, she is denied jobs soon after an inquiry from a potential employer shows up on her credit report.

A 56-year-old military veteran, one mistake on his credit report has cost him multiple jobs and is threatening his retirement dreams. He retired early in 2010 from a job as a security analyst with the U.S. government, before a costly divorce led him back into the workforce in 2011.

But a debt of $800 that he says was improperly recorded on his credit report as $8,000 has prevented him from getting the jobs he feels qualified for — like a security agent position with the Transportation Security Administration.

“They said [they had to deny me the job] because I may be at risk to take a bribe — since I’m already strapped for cash there is more of a likelihood I won’t scan that box at airport security if someone bribes me with money,” he said. “I have a proven history of veracity … to deny me an opportunity of employment because of a potential risk somewhere in the vague future is not fair.”

The TSA confirmed that it doesn’t hire applicants with “delinquent debt” — including past due accounts or debts in collection — exceeding $7,500.

So he contacted the three major credit bureaus, and one bureau fixed the error (he remains in limbo with the other two). The TSA agreed to reconsider him for a job when he presented a corrected report, but he was forced to start the application process over again. And by the time it got underway, the job he had applied for had already been filled. So for now, he is working as a part-time junior manager at FedEx — the only job he has been able to get.

“I really feel like I can do more than teach people how to load and unload boxes,” he said. “At my age, I need to plan my retirement — I can’t afford to waste time. Every delay is costing me my future.”

If you feel you are being passed over for job opportunities because of your credit; please contact InCreditable Advisors today at 317.202.1297 to see how we can help you get back into the job market with confidence.