Would You Date Someone with BAD Credit in Indiana? 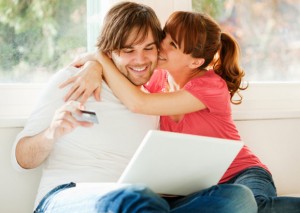 For many singles, bad credit can be a deal breaker when it comes to finding love. About 30% of women and 20% of men say they won’t marry a person with a low credit score, according to a new survey from FreeCreditScore.com that polled 1,000 adults.

Most respondents also said money management skills are just as important as looks when deciding whether someone is worth pursuing.

This is especially true for women, with nearly all female respondents ranking financial responsibility and financial compatibility as more important than or just as important as career ambition, physical attraction and sex and intimacy, the survey found.

While 57% of men say that credit scores play into their dating decisions, a staggering 75% of women said they consider the numerical rating. Credit scores are calculated based on your payment history, amount owed, the types of credit you have and the number of years that credit has been available to you.

Linda Basloe, a 57-year-old from Herkimer, N.Y., with excellent credit, said she won’t even give a man her digits until she knows his credit score.

“I definitely consider bad credit a deal breaker,” she said. “I wouldn’t even consider someone in that situation — the joke about me has always been ‘to please fill out a credit application and I will consider [you].'”

Why such concern over this magic number? Respondents said they worry that a partner with bad credit could hurt their prospects for qualifying for home loans, auto loans or lower interest rates and they’d be irresponsible about handling joint finances.

Basloe said she has worked hard to achieve financial independence and doesn’t want a relationship with someone financially irresponsible to ruin that.

“I wouldn’t attach myself to someone who would bring me down — mortgage-wise, or when it comes to buying a larger house or even [qualifying for] insurance rates — it affects every aspect of your life,” she said. “It doesn’t matter how beautiful they are, that’s not going to pay the mortgage.”

But no matter how important it may be, it can be an awkward topic to broach. Roughly half of the survey respondents have talked about their credit score with a romantic interest, with 39% discussing it during the first year of a relationship, 21% bringing it up before committing to a relationship and 19% comparing scores before moving in together. A mere 1% discussed their scores on a first date.

Basloe doesn’t ask someone for their credit score before dating them because she thinks they could easily lie, but she does look for red flags. She scans the local newspaper for people who owe back taxes, pays attention to what kind of car a man drives and whether he has purchased a home or is still renting.

Jerry Koller, a 50-year old from Irvine, Calif., said he put a halt to a budding romance a couple of years ago after seeing stacks of unopened bills and rent notices in his date’s kitchen.

“I went to dinner and casually asked her about her credit and she told me she couldn’t buy a car recently as her scores were no good,” he said. “[I] made it a last date.”

To cater to the credit-obsessed, there are even dating sites where you can find someone in your score range. At Creditscoredating.com, credit scores are factored into the matchmaking process, pairing you with users who have similar scores. Since scores are self-reported, however, it’s hard to tell if someone is telling the truth.

According to the site’s scoring guide:

Would you consider dating someone with BAD Credit? Call InCreditable Advisors of Indianapolis, Indiana today at 317.202.1297 to schedule your credit consultation to see where your Credit stands!